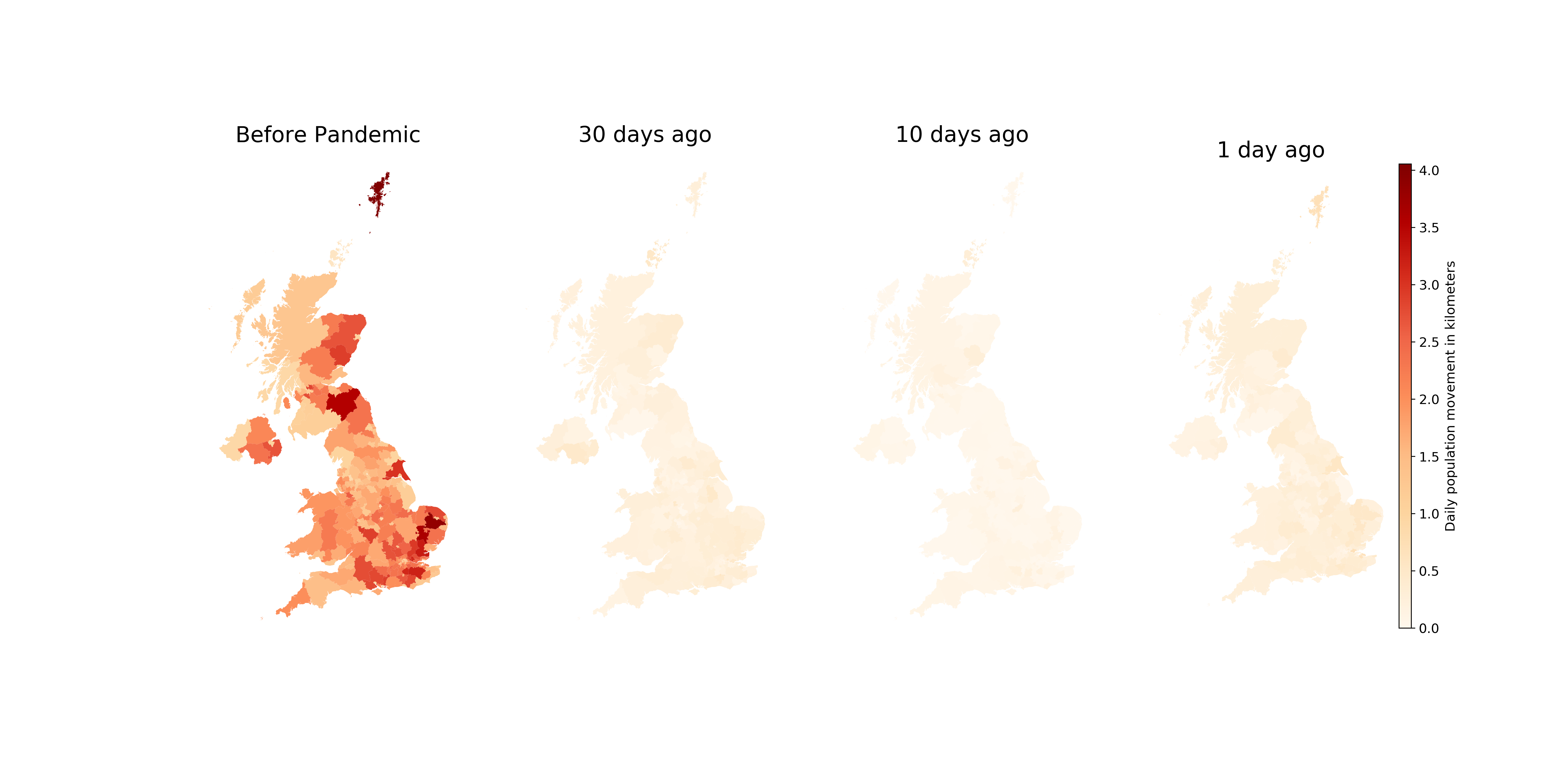 Thank you! Your submission has been received!
Oops! Something went wrong while submitting the form.
United Kingdom

Compared to 135,000 who left Birmingham for elsewhere in the West Midlands and with relatively little net outflow from Manchester

There has been much speculation over the possibility that large numbers of people left major cities in England, particularly London, for other areas of the country in the weeks before the government’s instruction for the British public to stay at home and socially distance, announced on 23rd March. Anonymised and aggregated GDPR-compliant location data drawn from opted-in mobile phone users shows that this trend did occur in both London and Birmingham but not to any great extent in Manchester.

On 16th March, the day that the government asked households to self-isolate should any single member show symptoms of coronavirus, just over 100,000 people had left already London for other parts of the country. This figure rose to just under 150,000 on 18th March, which was the day that school closures were announced to begin in two day’s time. When schools closed across the UK at end of the day on 20th March, total net outflow from London had risen again to stand at just over 200,0000 and three days later, when the Prime Minister asked people to stay home for all but essential reasons, the total reached 237,000. Since then, the net outflow from London has crept upwards over later March and into the first half of April, standing at 262,000 by 12th April. This equates to an additional 25,000 people leaving London for other areas of the country since 23rd March government instruction to socially distance, showing some subsequent movement post-lockdown.

Even so, these overall pattern shows that the vast majority, or 90%, of those who have left London since March did so prior to the government’s instruction to reduce movement for all but essential medical, food shopping, and work-related reasons. Since the data is completely anonymous and aggregated, it does not provide any indication of the reasons why people chose to leave London or why those chose to travel to the destinations that they chose. However, it may be reasonably speculated that people may have done this for any number of reasons, including the possibility of reuniting with family and loved ones located in other areas of the country in anticipation of the spread of the national coronavirus epidemic and the government’s increasing nudge towards social distancing prior to 23rd March.

Notably the evidence suggests that people representing only a very smaller proportion of London’s total population, about 3%, have left London since March. 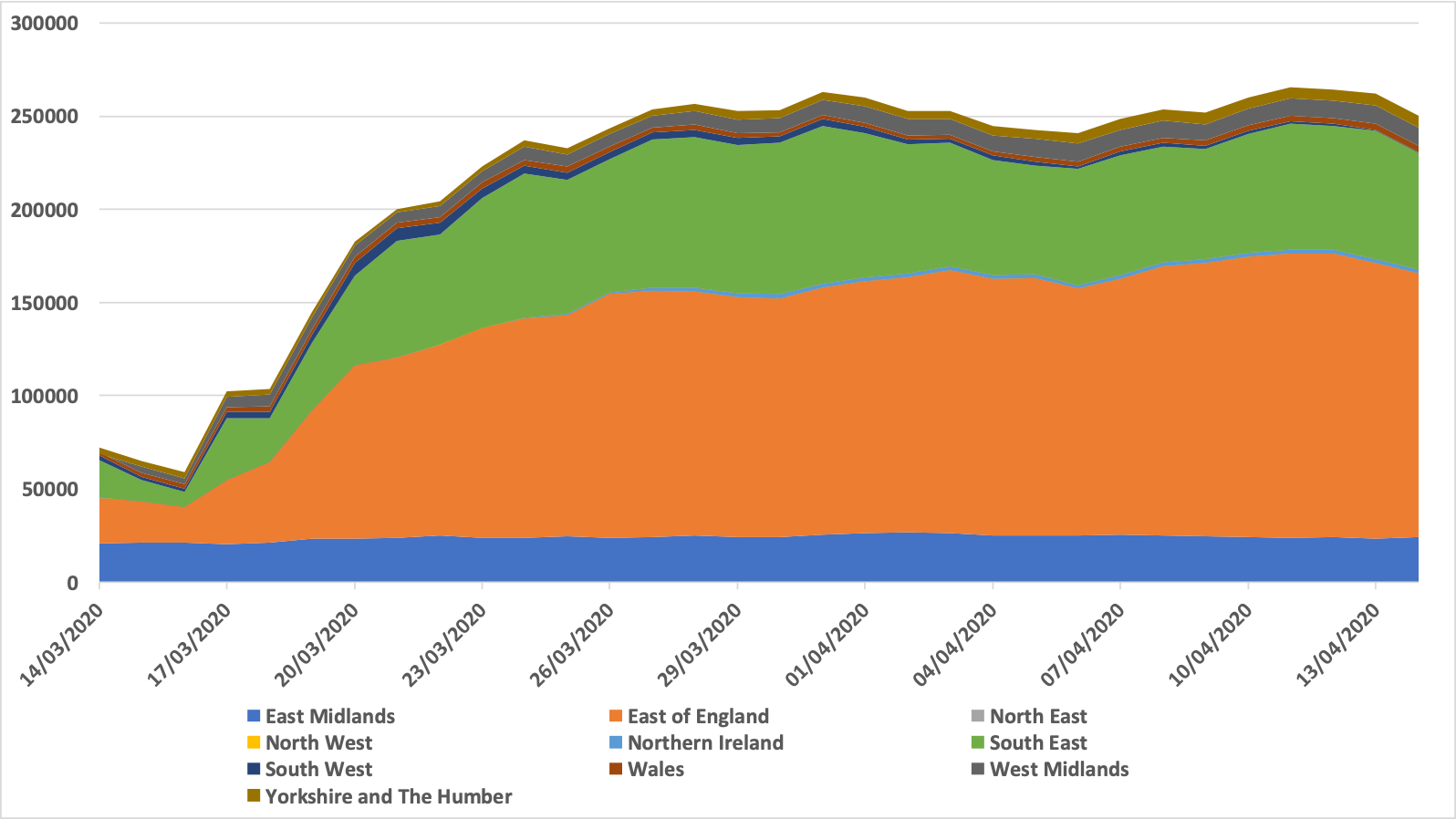 Net outflow from London by region 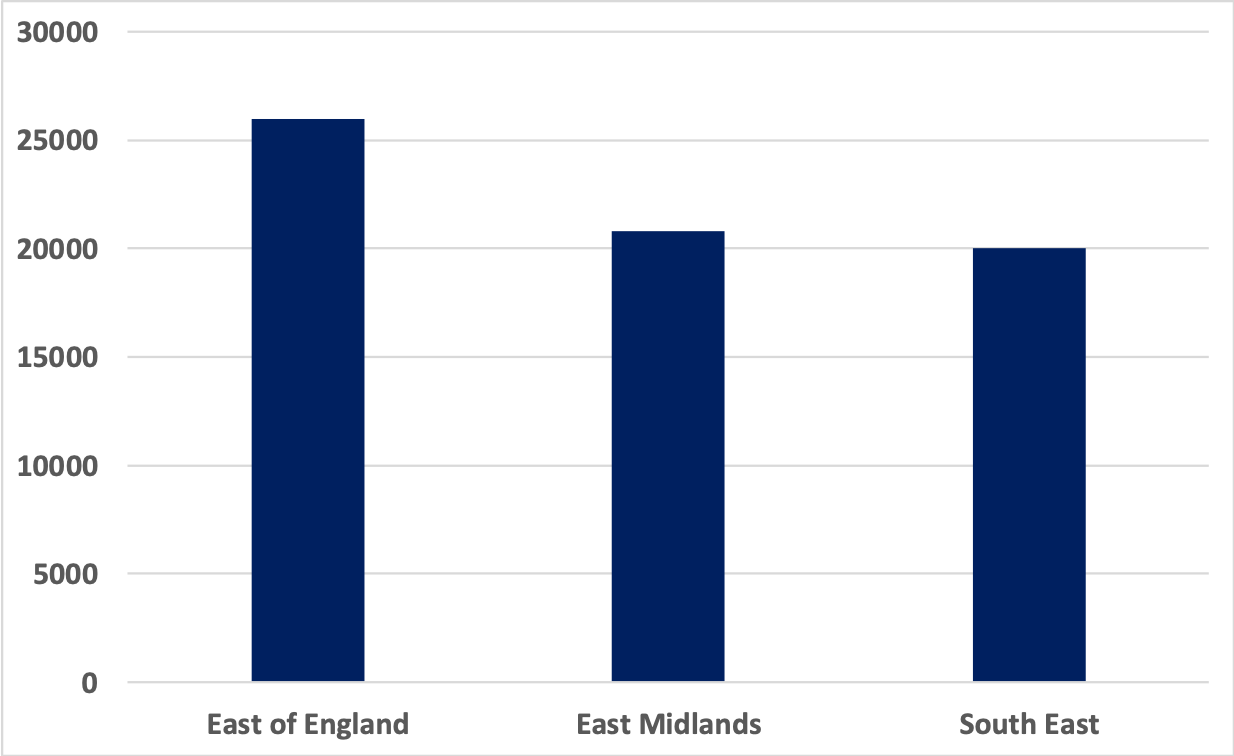 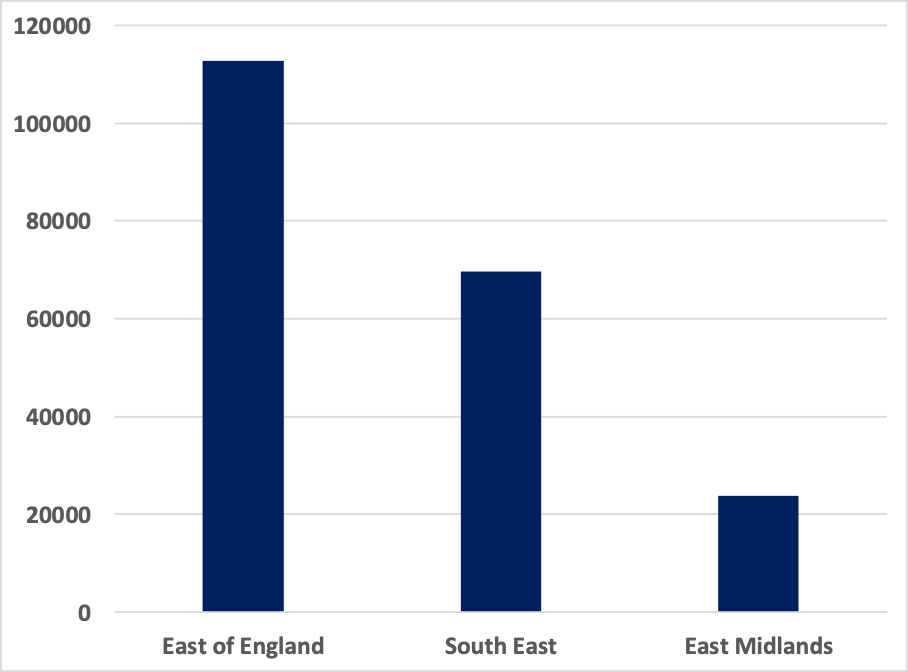 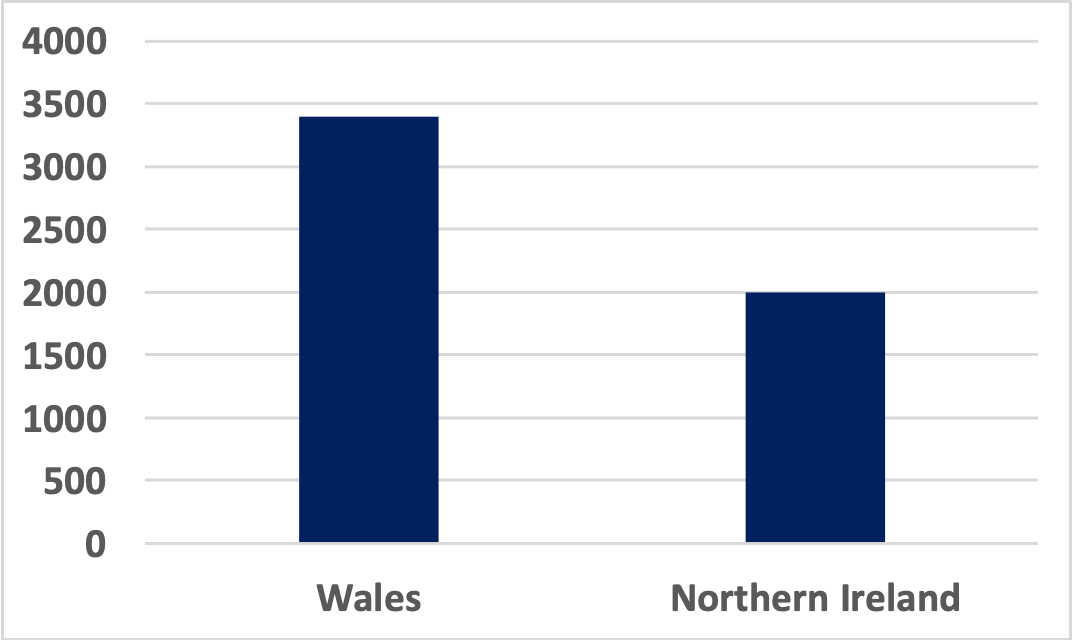 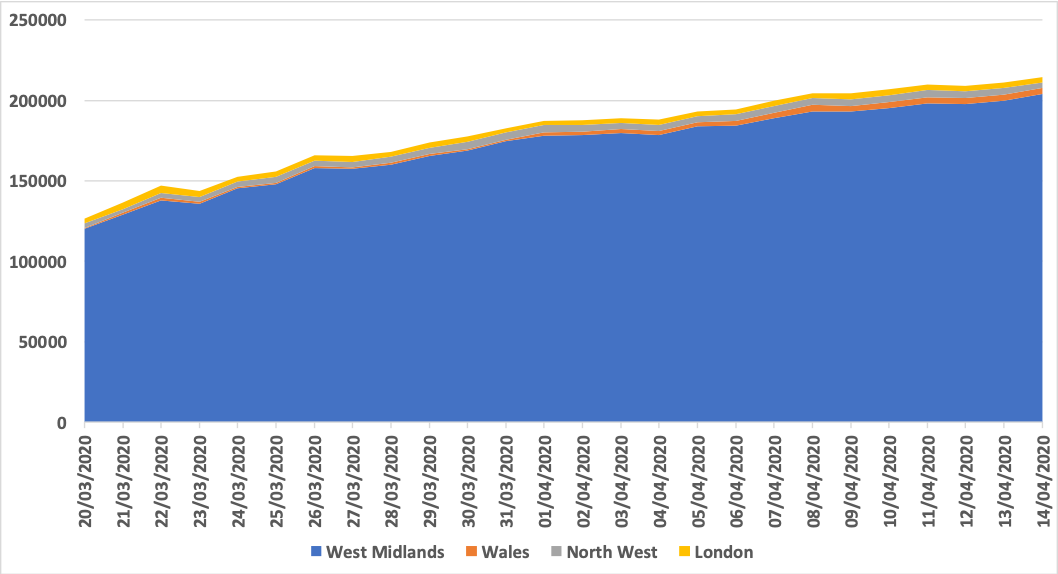 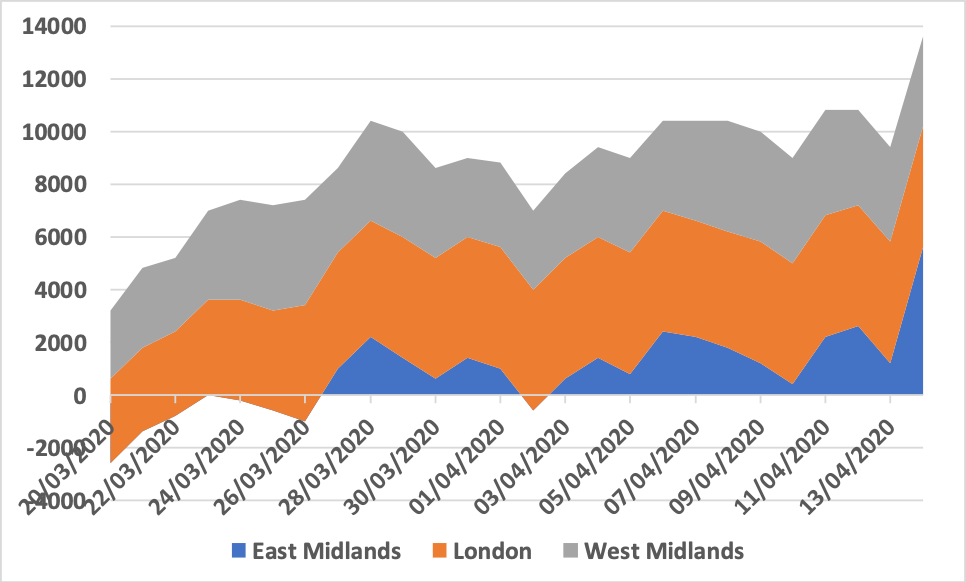 Most people who have left London since 1st March have gone to two regions, namely the East and the South East of England, although there has been additionally been some net outflow to the East Midlands. As can be seen in the chart below, net outflow to those three regions was actually fairly similar on 14th March

This had changed by 23rd March, the day of the national lockdown announcement, with net outflow from London standing at over 100,000 to counties in the East of England alone and a further 70,000 having travelled to the South East. Those going from London to the East Midlands stood at nearly 25,000.

There has been some speculation that there may have been an exodus of Londoners to other UK nations such as Wales. The data does not show strong evidence of such a trend. By 14th April, net outflow from London to Wales stood at 3,400 with 2,000 people having left London for Northern Ireland.

The top destination for those leaving Manchester was the East Midlands, which 5,600 people had left for by 14th April. This was followed by London, which received 4,600 people from Manchester. Finally, 3,400 people left Manchester for the West Midlands.

More than 55% of Britons stayed at home on Easter Monday

That is 2.5 times greater than before the coronavirus outbreak

The British public has been increasingly following social distancing

Adherence to social distancing has been on the rise since the Prime Minister's 23rd March announcment for the British public to 'stay at home' in an effort to contain the spread of coronavirus. On that day the percentage of Britons not moving was just under 40%. This share of 'non-movers' has significantly increased over the following weeks, reaching a high point of 60% on Easter Sunday. On Easter Monday, the figure had dipped slightly to 55%.

Evidence of decreasing population movement in the UK can first be seen after 16th March when people were asked to self-isolate should they begin showing coronavirus symptoms. This upward trend began to gain pace with the Wednesday 18th March announcement that schools would shut indefinitely by the end of the week. From this point share of 'non-movers', or those moving less than 100 metres, has continued to grow albeit with some fluctuations along the way.

Movement has been steadily falling since 17th March

On 16th March, the Prime Minister announced two instructions to members of the public. Firstly, all households in which any single member was displaying coronavirus symptoms were asked to self-isolate and to stay at home for two weeks. Secondly, non-essential contact with others and all unnecessary travel was suspended.
‍
With this announcement alone, UK population movement sank by 21 percent. With the announcement of school closures just two days later, population movement dropped by a further 37 percent in the following days.

As the chart below shows, the lion's share of population movement decrease had already taken place by the Prime Minister's announcement on 23rd March of a full scale national lockdown. However, this instruction saw an additional fall in people's movement by another 26 percent to its current level of 87 percent below the pre-crisis movement patterns. Based on the data, it would appear that the British public had already been nudged in this direction before the 23rd March lockdown instruction by the preceding self-isolation and school closure announcements likely combined with media coverage on the global pandemic.

The bold time-series in the chart above shows the median radius of gyration, which is a set of spatial points defined as the average distance between the points and the centre of mass of those points.

The reduction in population movement first started in London where COVID-19 infection rates were leading other British regions by over one week. Strikingly, one week after the announcement of the national lockdown, population movement dropped below 90% nearly everywhere in the United Kingdom.

This was most likely due to the good weather on Saturday 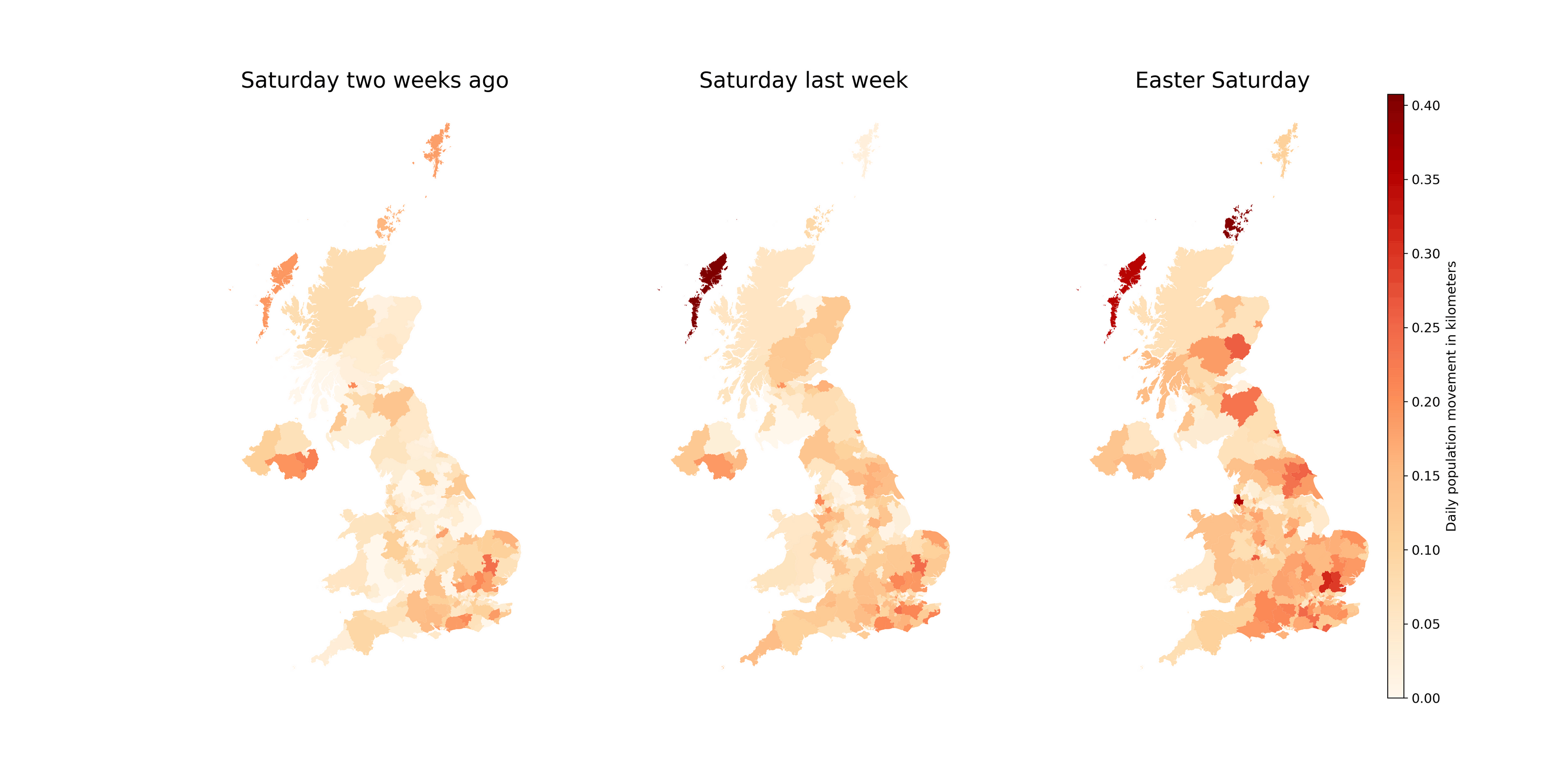 On Easter Sunday, however, we saw overall low levels of movement - in line with what we saw on the previous two Sundays. 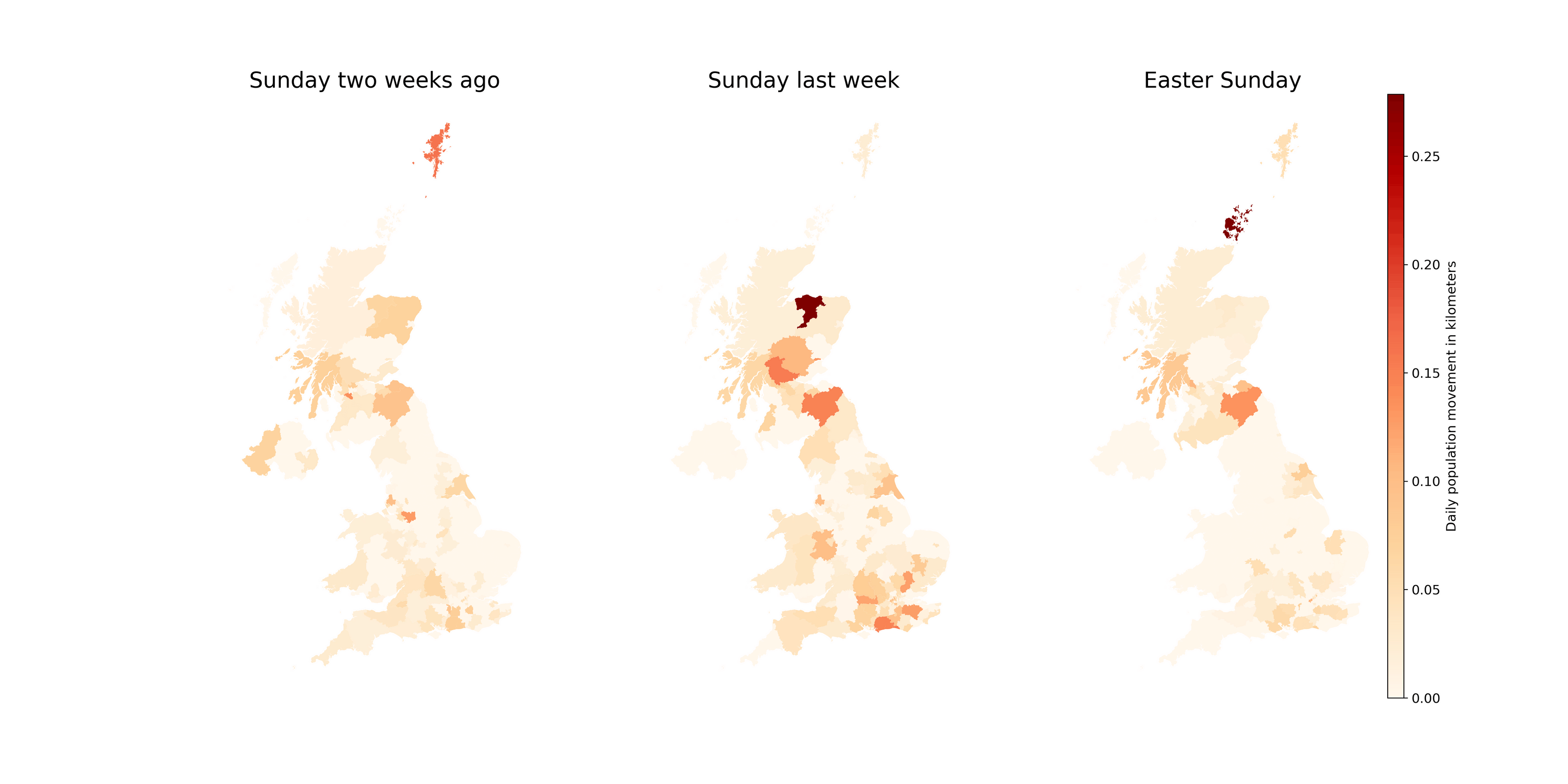 While the rail journeys in the UK are now at just five percent of normal levels, population flows between regions only dropped in its peak around 80 percent. This suggests a shift in the mode of transport from public options, such as rail, bus and tube to private means of transport by car. The drop in population flow is also notably lower than the drop in population movement.
‍
We measure population flows as the percentage change in the people entering the destination clinical commissioning group from a different origin area. As the population practices social distancing, we expect to see fewer border crossings.

Last week, the best time to go to supermarkets was on Tuesday at 9am

Supermarket footfall across the United Kingdom exhibited minor shifts from the evening hours to the before noon hours. With usual shopping patterns, the lowest footfall in a supermarket is 9 am on a Sunday. However, during the lockdown, the footfall on Sunday mornings has substantially increased. For the last week, the best time to go grocery shopping is Tuesday mornings from 9 to 10 am. 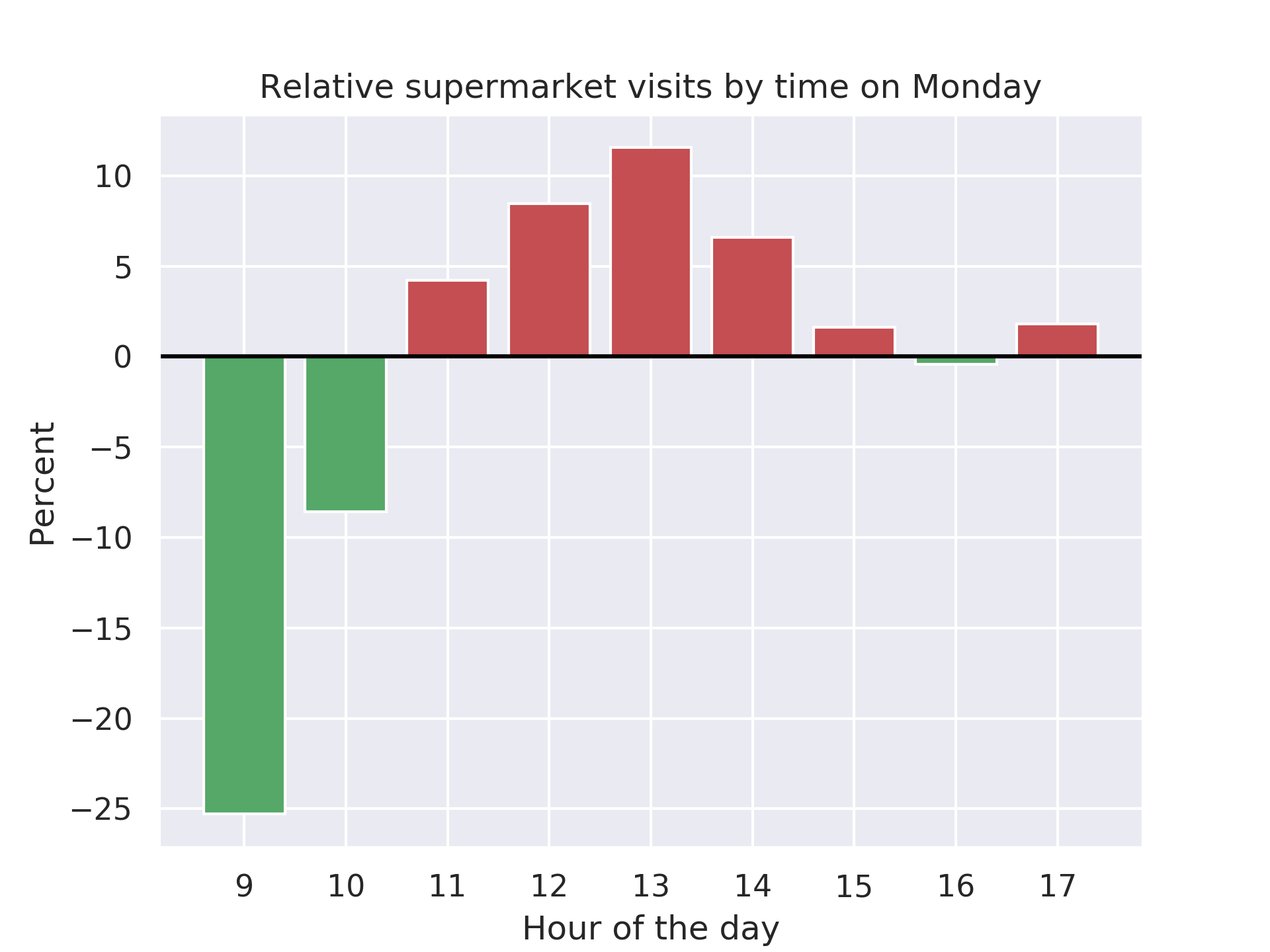 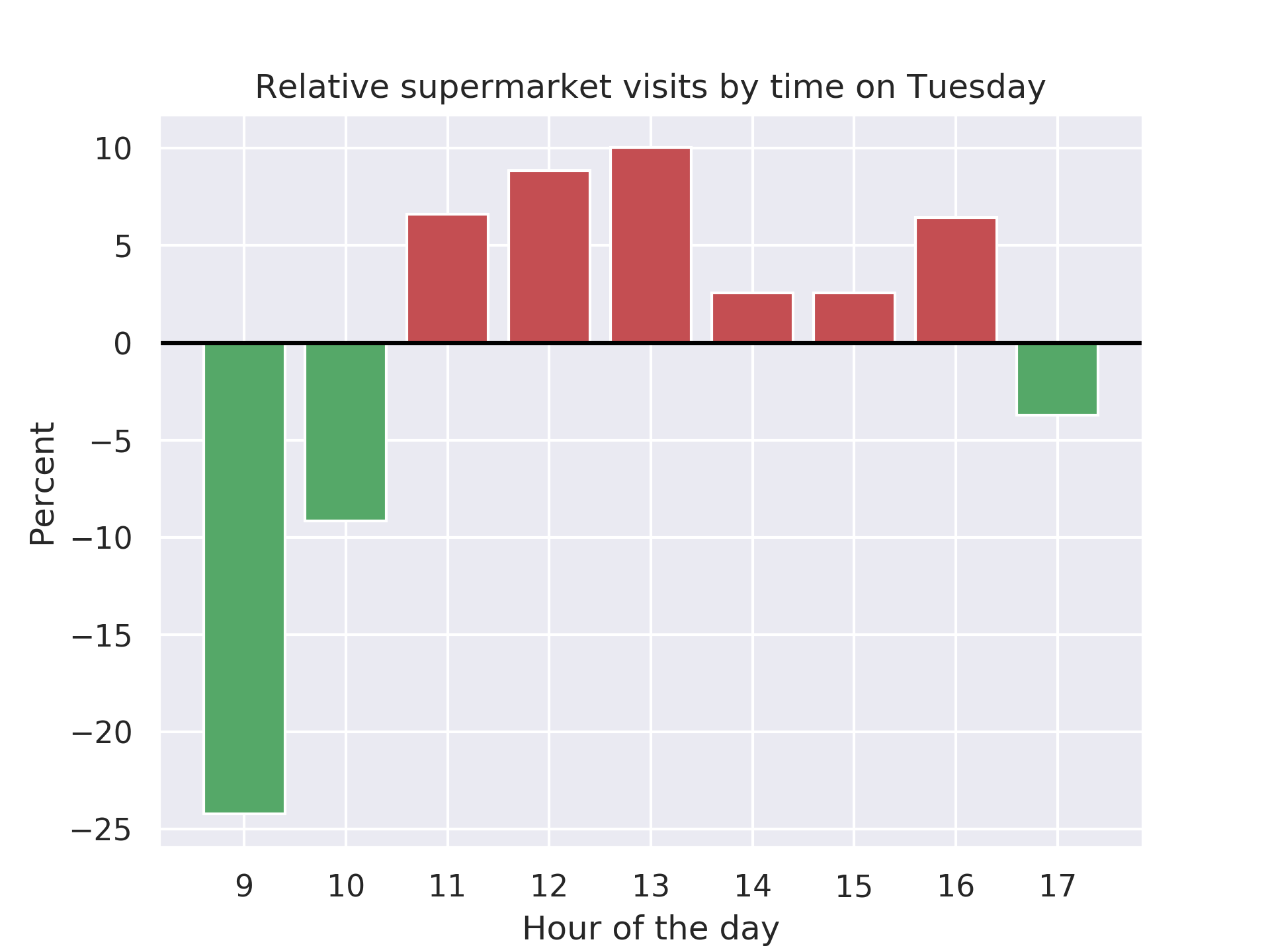 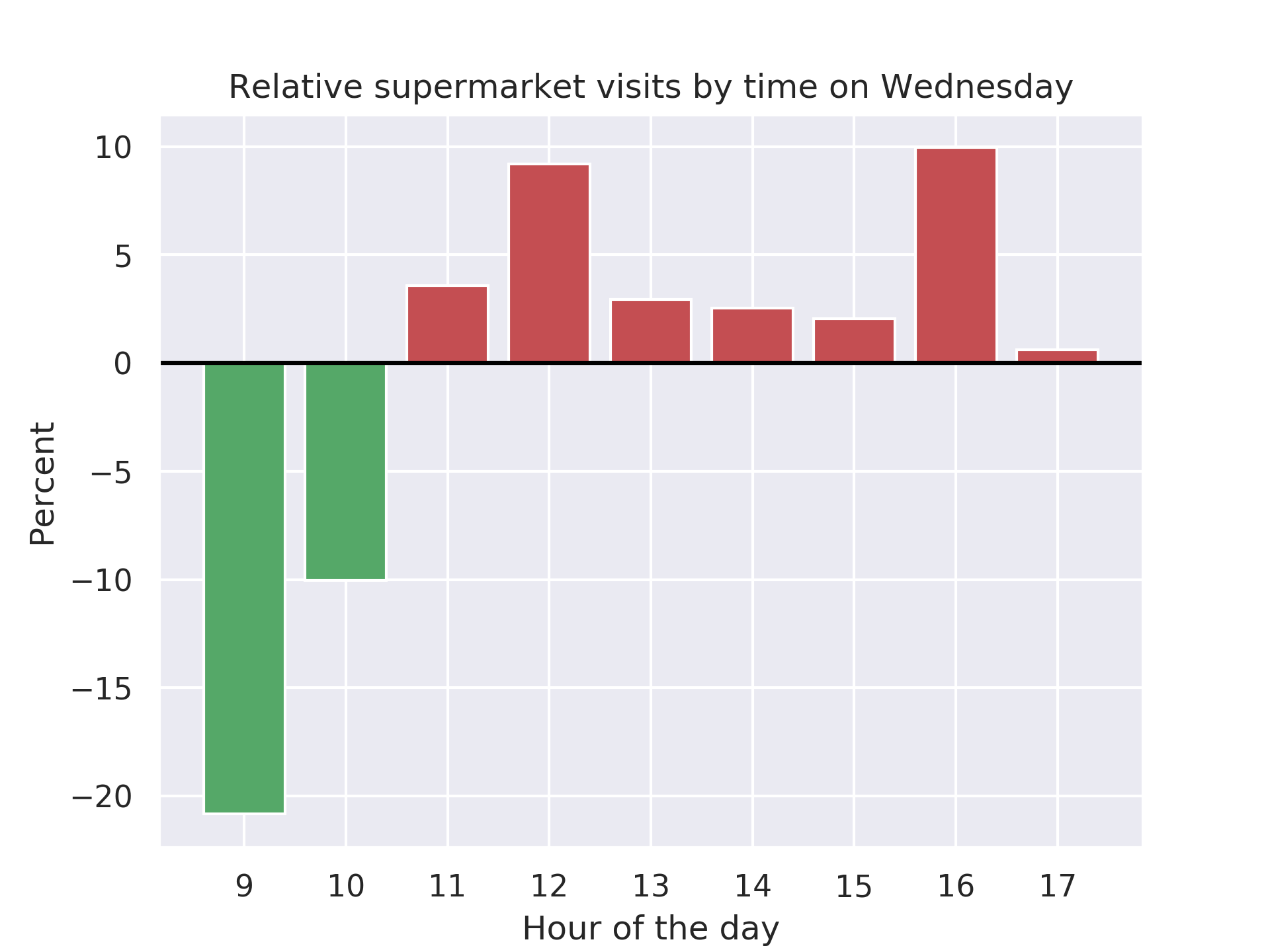 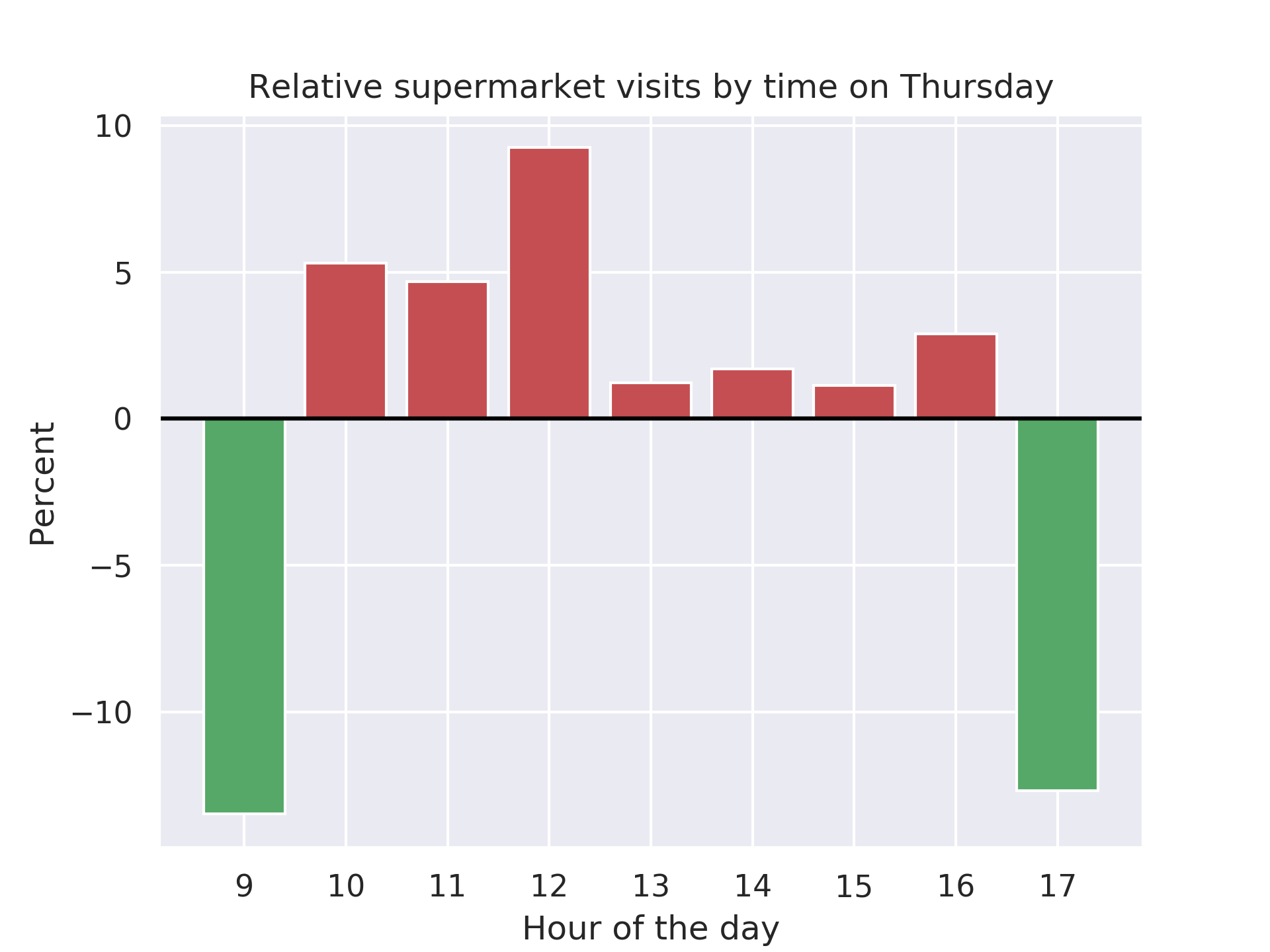 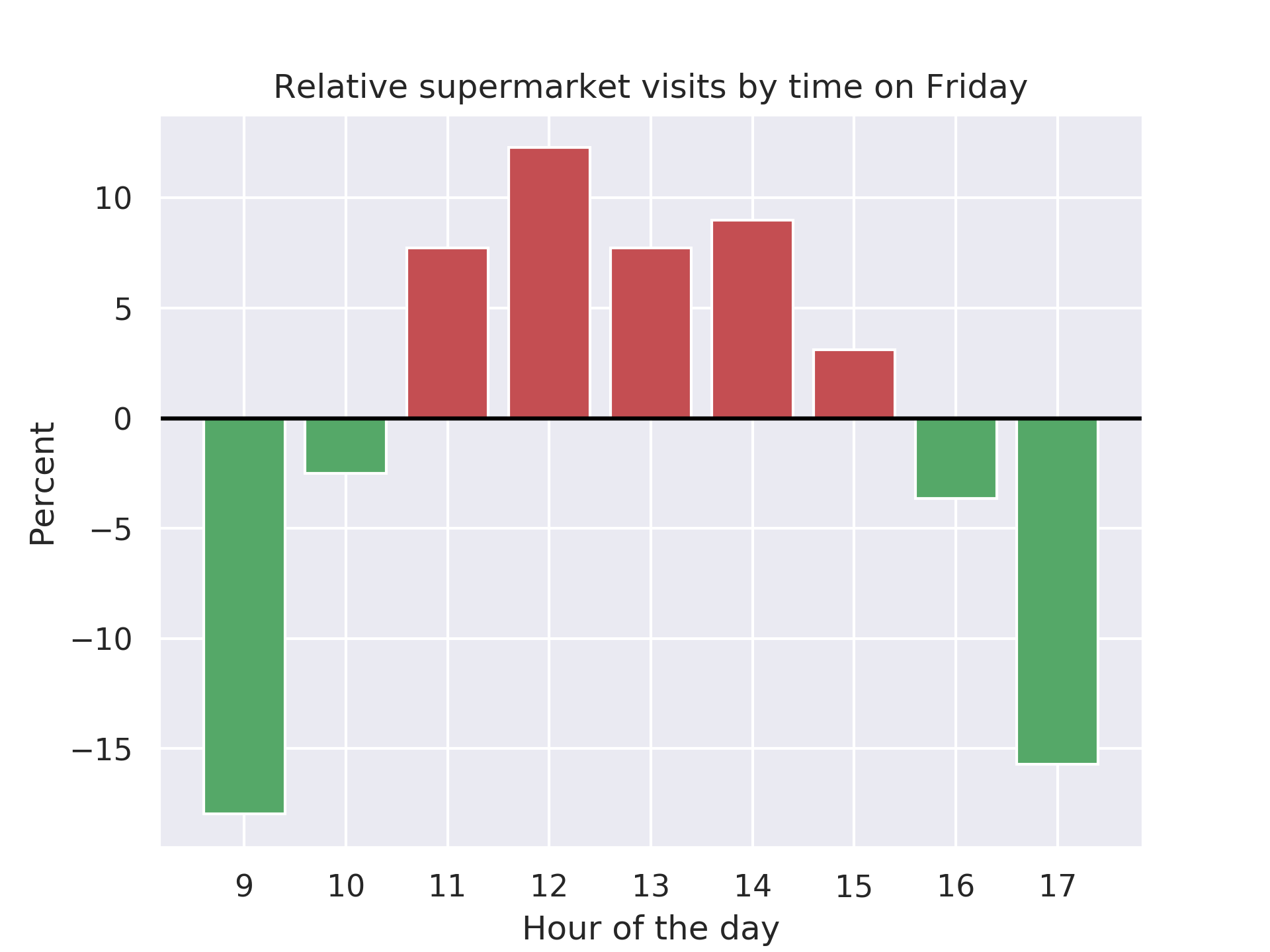 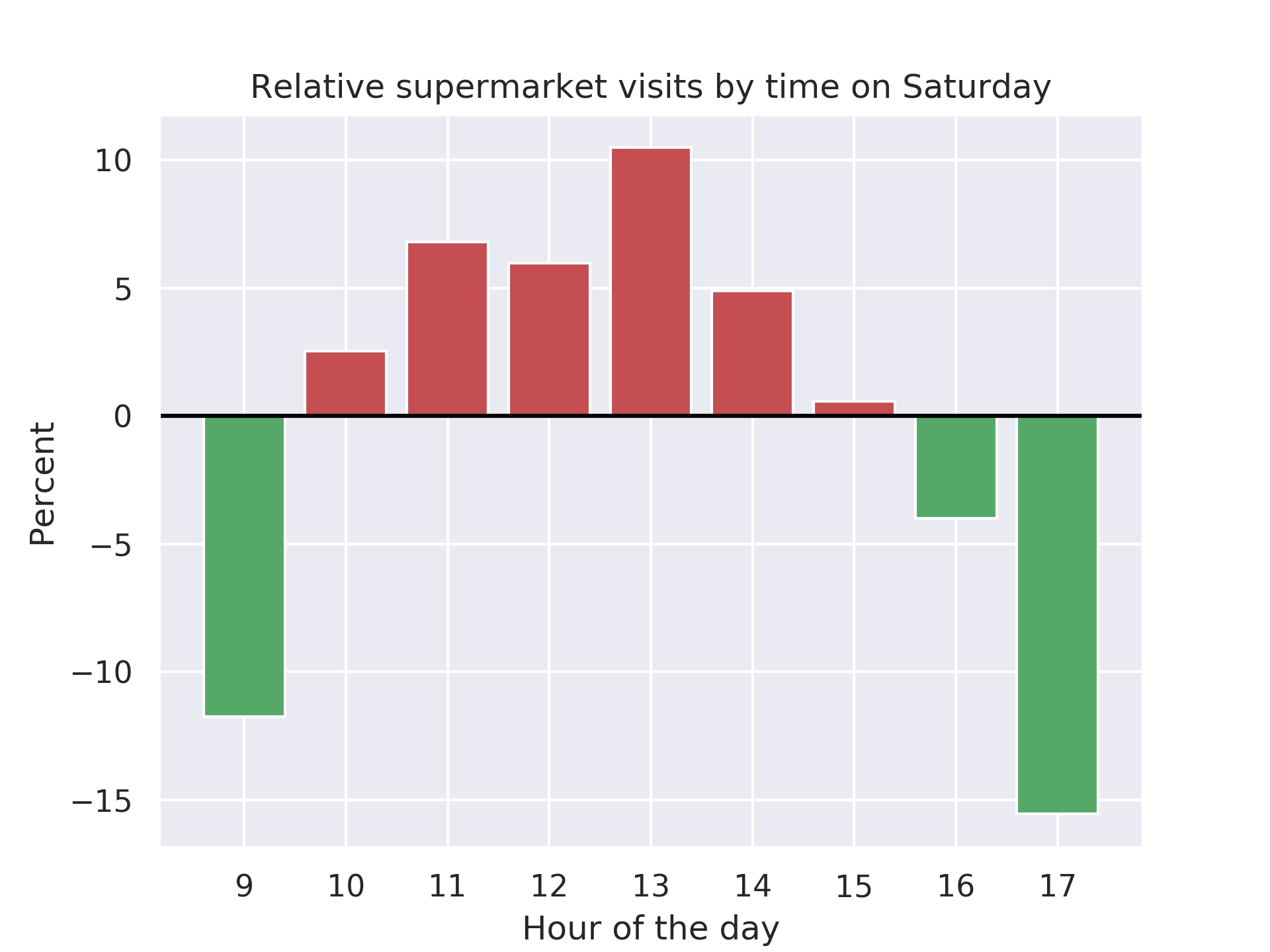 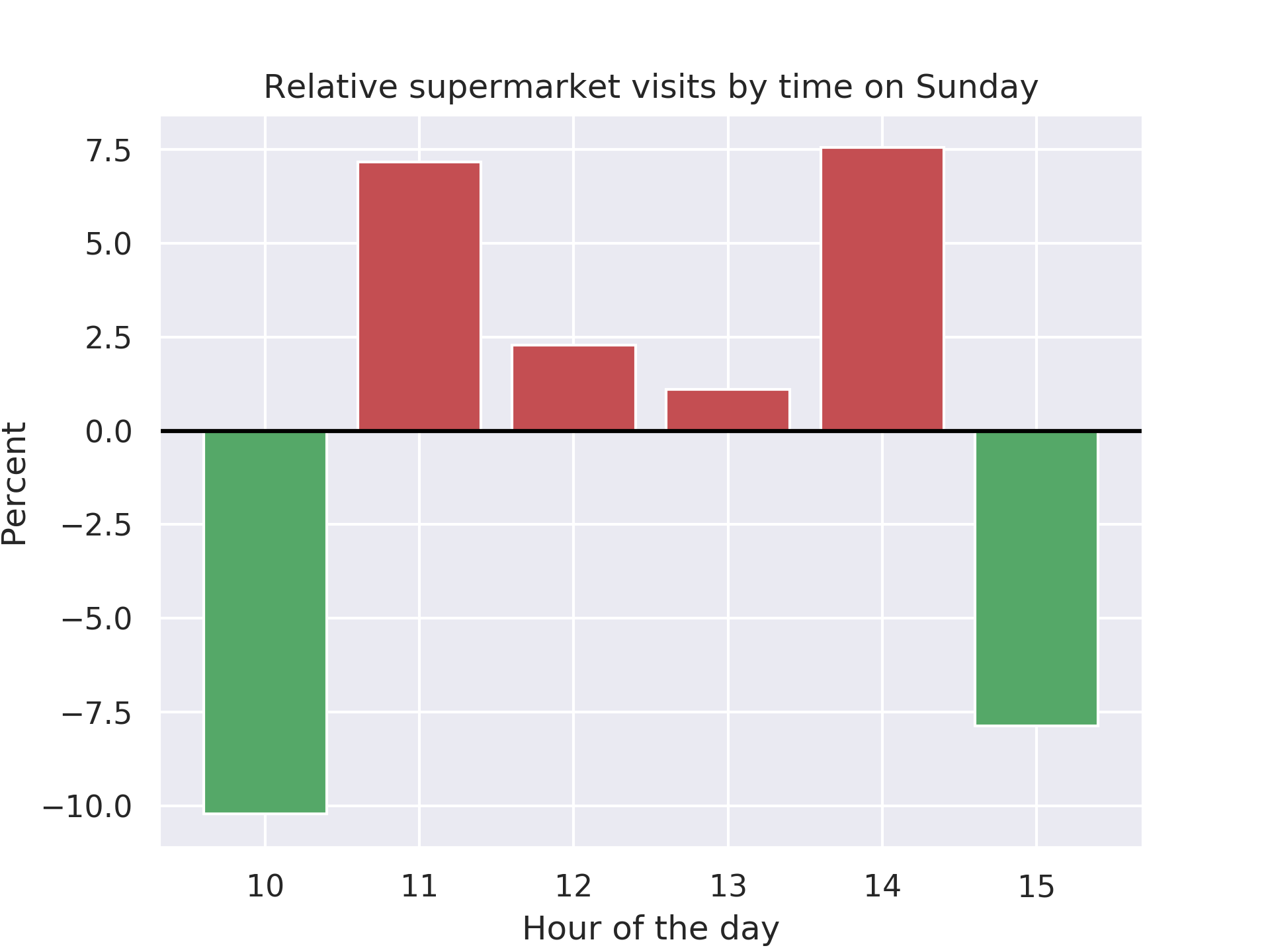 Hospital visits have dropped by 65%

Despite the surge in ICU demand, people avoided hospital visits

Despite surge in ICU demand, overall drop in hospital footfall

Visits to public parks in the UK dropped 23%

Movement in parks has decreased less than elsewhere

Visits to Public Parks have decreased less than overall movement

Risk rank based on age, respiratory disease and cardiovascular conditions

Risk rank based on age, respiratory disease and cardiovascular conditions

The risk rank is determined by two components: 1) percentage of individuals aged 70 and above, and 2) percentage of individuals aged 16-69 and below with any of the health conditions in respiratory diseases (such as asthma and chronic obstructive pulmonary disease), cardiovascular diseases (such as stroke, heart attack, and angina, diabetes and hypertension).

Forecast of the number of daily new confirmed COVID-19 cases for three regions: UK as a whole, London and aggregate regions outside London.  NHS actual daily confirmed cases are shown as ‘+’. Median, upper and lower quantiles of predicted cases are shown as black, red and green lines respectively. The model is a simple non-stochastic compartmental SEIR. Confirmed cases are assumed to be proportional to the exposure (i.e. the E in the SEIR model), subject to some randomness. We are not epidemic modellers and have no training in epidemiology.  Our forecasts, therefore, should be treated with a high degree of scepticism. 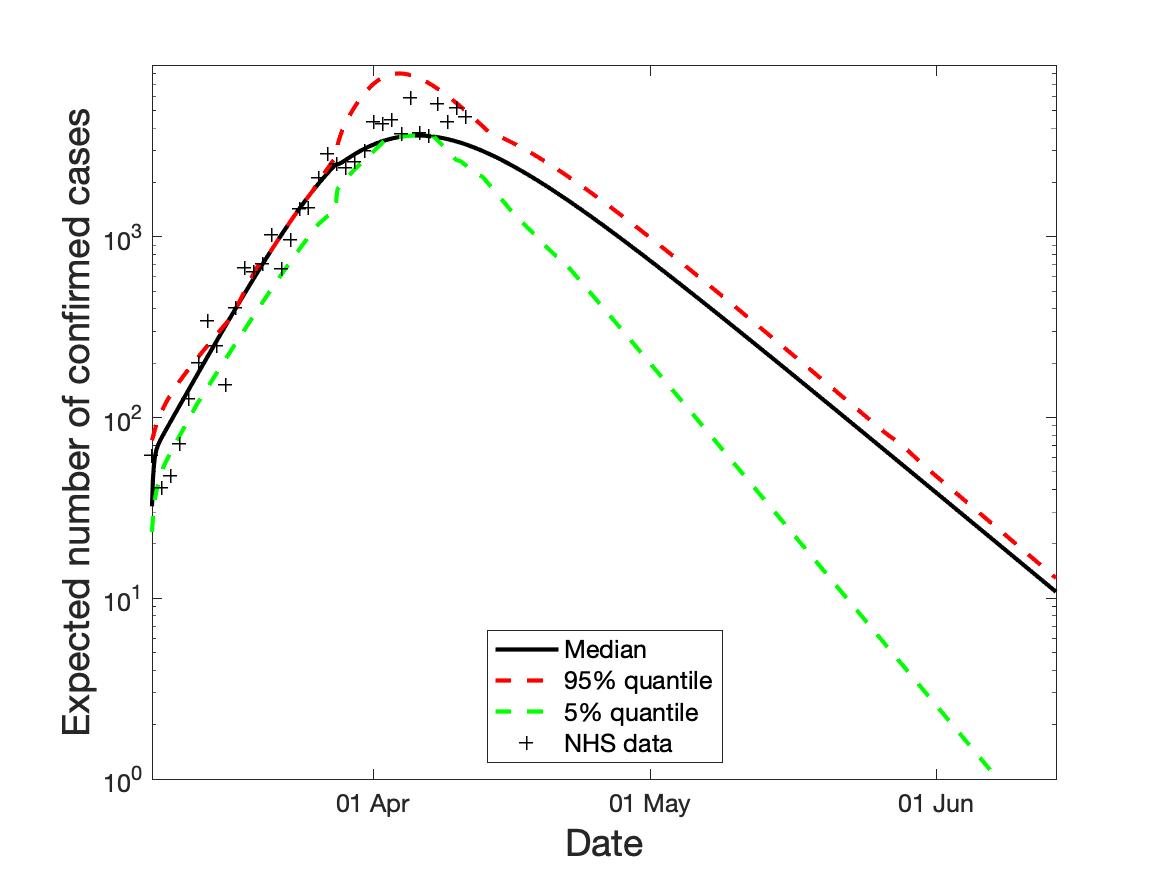 The articles, data analytics and visualisations that appear on this website draw on work and input from different researchers as well as data from different providers.
When referencing the content of this website, please also cite the underlying data sources. Content that appears on this website should be cited as:
Matthias Qian, Adam Saunders, Daniel Pesch, Steven Reece, Won Do Lee, Xiaowen Dong and Renaud Lambiotte (2020), Oxford COVID-19 Impact Monitor, https://www.oxford-covid-19.com.